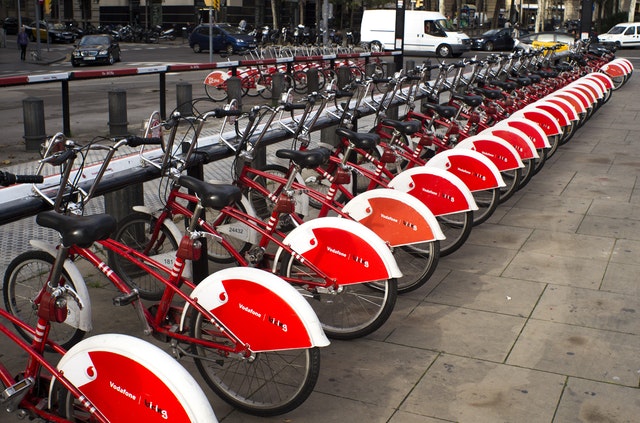 I’ve never really been much of a cyclist. When I drove my car around  London, cyclists were like flies you wanted to swat off the road. They always seemed to be so self righteous as they were the ones saving the planet, hogging the road at 5mph dressed in a helmet that barely covers their bald patch and rocking a waistcoat that looks like they recently lost a fight with a highlighter pen.

It wasn’t until I moved to Barcelona that I really saw the benefits that a bike could bring. Firstly the city is the perfect size for biking. The city centre is also very flat so to cycle round it is not at all strenuous and is a very pleasant experience. You can literally get anywhere you want in the city in under 15 minutes on a bike. And that has been made especially easy as there are now over 168km (with plans to extend to up to 300km) of bike lanes around Barcelona. Many of the main streets in this city are built so wide that putting in bike lanes seemed, and is, an incredibly logical way for people to get around. The bike lanes are clearly marked and with the roads being so wide it feels very safe riding around the city. In London EVERYONE wears a cycle helmet, you are mad if you don’t. It is rare to see people cycling round Barcelona wearing helmets, certainly on the Free Bike Tour I went on no one did. Many bike lanes are actually right down the centre of the street! It is a surreal and wonderful experience cycling right down the centre of these huge, tree lined boulevards with cars going either side of you whilst you are in the safety of blocked of cycle lanes.

When I first came here I did a Free Bike Tour and it was amazing how much ground we covered. The tour was 13.5km which was completed in roughly three hours. It took us from the Columbus State, to a huge Roy Licenstein Sculpture. From there onto Barcelona Cathedral, the Arc De Triumph,  Parc Ciutedella, up to Sagrada Familia and we ended up down at the sea at the Port Olympic. It was by far the best way to see the city, learn your bearings as to where everything is, get a bit of exercise and after all that a cold beer down on the beach has never tasted better!

There are of course other options to view this beautiful city. You could walk everywhere, which is a perfectly viable option. The city centre is reasonably small and many people do walk around it but you don’t cover nearly as much ground as you do on a bike.  Many people come here for only a day or two and with time being precious cycling over walking everywhere is a no brainer. You could take a tour bus, which lets be honest is the most boring form of transport there is, listening to an automated recording of the various monuments and buildings you pass. One of the ladies on the bike tour I went on said she did the tour bus the previous day and fell asleep as she looped around the city! Or you could take the metro. I am always dumbfounded by people thinking this is a productive way to see a city. You are underground you donut. How much are you really taking in??

When you arrive in a new city, you first inclination is to want to explore. You want to check it out, have a roam around, get your bearings, see what all the fuss is about and why people have been badgering you for so long to go there. A bike gives you complete freedom to go anywhere you like. You are not restricted by traffic or metro maps, where you go and the route you take are entirely up to you. After I finished the Free Bike Tour I then rented a bike for my next two days here as it cut down a thirty minute walk to the beach down to five.

One of my favourite routes to cycle in the city starts at Port Vell at the bottom of La Rambla. You hug the waterline as you cycle down to the Barceloneta beach. From here you can enjoy the stunning beach views as you cycle along the coastline, past the Port Olympic where the beach clubs are. After that are beaches Nova Icaria, Playa Bogatell, Playa de Llevant. The bike paths are long and winding and great fun to ride. These beaches are also much more relaxed and spacious plus you are not hassled by beer and luke warm mojito sellers constantly!

If you would like more of a challenging ride then a cycle up Montjuic is for you.  There are many attractions on the hill including the Joan Miro fountain, Botanic Gardens, Montjuic Castle, The Olympic Stadium and Swimming Pool. For a more gradual incline begin your journey at Placa Espanya and continue along Avenue de L’Estadi which brings you to both the stadium and the fountain. A dedicated cycle path will take you to the castle, it is a somewhat strenuous ride but the spectacular views of the city make it well worth it.

I am now back in Barcelona for the third time and I am of course renting a bike for my stay. There is no better way to see this city. The Free Bike Tour was a perfect introduction. It covered all the main areas and I got a great insight into the history of such an interesting place.  With it’s amazing climate, long wide roads and countless well mapped out bike lanes there is no mode of transport more suited for you to fully appreaciate the breath taking beauty of the incredible city. So when you get here jump on a bike and enjoy the ride, you won’t regret it, quite the opposite.