There’s something of beauty about Barcelona in September – the atmosphere is filled with an air of festivities, and the weather is delightful. At the same time, all roads lead to the Catalan capital for Barcelona’s biggest street festival of the year, Les Festes de la Mercè. The city streets come alive for the week-long celebration of the Patron Saint of Barcelona.

From colourful whimsical parades and human pyramids to fireworks and interactive displays, here’s the low down on Festes de la Mercè this year.

The colourful history of Festes de la Mercè dates as far back as the Middle Ages. As with most traditional celebrations in Barcelona, the festival of Mercè has religious roots. It all started when the Catalonian city was miraculously saved by La Mare de Déu de la Mercè (aka Virgin of Grace) and the Patron Saint of Barcelona from two terrible disasters.

It is thought that the Virgin of Grace appeared to King Jaume I on September 24th, 1218, and asked him to save his fellow citizen Christians under capture in Saracen lands. He was ordered to start a religious order to facilitate their release, which is why the annual festival has been marked since the Middle Ages.

More than four centuries later, the saint appeared again in 1687 and saved Barcelona from a locust plague. When the city was free of the epidemic, she was designated patroness of Barcelona, though this was not validated or recognised by the Pope until 1868. Since then, an annual celebration in honour of the Virgin has been held throughout the city.

It wasn’t until the late nineteenth century that the local authorities recognised Festes de la Mercè despite being celebrated almost spontaneously since the early 13th century. From here on, the many different colourful performances, dances, and displays that occur during the festival have been internally coordinated by the local authorities. Most neighbourhoods have also played a critical role in making the celebration successful over the centuries.

Interestingly, mercè is a Catalan word usually synonymous with loving mercy, a sense of compassion, assistance, help, and service to fellow humankind. A wooden image of La Mare de Déu de la Mercè is often venerated in a basilica in the Gothic Quarter.

What’s more, Barcelona welcomes a different guest city each year to celebrate the festival of Mercè. It is part of the city’s initiative to widen cultural ties and understanding between states around the world, as well as celebrate the best of its cultural and artistic scene. The city duo will collaborate for several months in the build-up to the festival, marrying the best cultures of the two cities to create a truly unique experience. Recent guest cities include Dhaka, St. Petersburg, Montreal, Stockholm, and Buenos Aires.

Festes de la Mercè is an annual street festival held in Barcelona in honour of the city’s patron saint, Our Lady of Mercy (La Mare de Déu de la Mercè). The four-day fare is one of the most notable events in Barcelona’s calendar and takes place in late September.

During the event, the streets and all barrios of Barcelona come together to honour and celebrate the patron who saved the city twice from disasters. Although its roots are religious, today’s la Mercè festival has almost nothing to do with religion. Instead, the city celebrates its heritage with colourful dances, impressive displays, and cultural traditions.

When is the La Mercè Festival?

The Festes de la Mercè takes place each year, usually over four or five days in late September. Many events, celebrations, and programmes occur in the lead-up to the actual day of La Mercè, which takes place on September 24th. All festivities and fanfare are designed to take place around this special occasion.

This year, the festival of Our Lady of Mercy will occur from 23rd through 26th September.

What Occurs during the Festival?

Plenty! La Mercè is a massive citywide affair, comprising many different festivals co-occurring. There are, in fact, too many festivals that even Catalonians themselves are spoilt for choice.

Here are La Mercè highlights you may want to check out during the week-long event:

What Else Should I Expect during the La Mercè Festival?

Many city museums, buildings, and attractions are discounted or free during the festival. Other must-see things include Mostra de Vins i Caves de Catalunya, Capgrossos, Castells, and Piromusical at La Mercè.

That is it for our short guide on Festes de la Mercè we hope you found it useful! We have plenty more short guides and interesting articles in our blog so please make sure you look through it for more ideas on what to do when you are in Barcelona! Check out our blog here!

more from our blog

Pub Crawl Barcelona  Opium Nightclub BarcelonaOpium nightclub in Barcelona! Barcelona has earned a well-deserved reputation as the Spanish party central, with a riveting nightlife that lures in party-goers and music lovers from across the globe. The city is home... 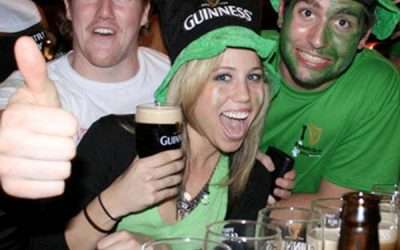 Pub Crawl Barcelona  George Payne BarcelonaGeorge Payne Irish Bar in Barcelona! Barcelona abounds with many pubs, but only a few are as famous or cherished as George Payne, which you'll find right in the heart of the city. This Irish pub's addictive, charming... Pub Crawl Barcelona  Pacha Nightclub BarcelonaPacha nightclub in Barcelona! Are you in pursuit of an unforgettable thrill? Dance your night away at Pacha Barcelona. It's a must-visit top-of-the-line nightclub favorably positioned on the city’s beautiful...