Luther Lifestyle Barcelona has had the nerve to accuse us of some hideous activity so we want to set the record straight on who Luther Lifestyle are and who is behind them.

We have been inundated with replies and responses to this article from people who had a bad experience with Patrick Behan most of whom were looking for refunds or compensation in some way.

We also had a begging letter from Patrick Behan himself asking for the article to be removed.

Now to everyone, I cannot give you the compensation you are after but I do have Patrick Behan’s original CV with his home address any and all claims should be directed there.

I would also ask Patrick Behan to provide any evidence negating anything I have said if just one thing can be proven wrong I will remove the entire article! 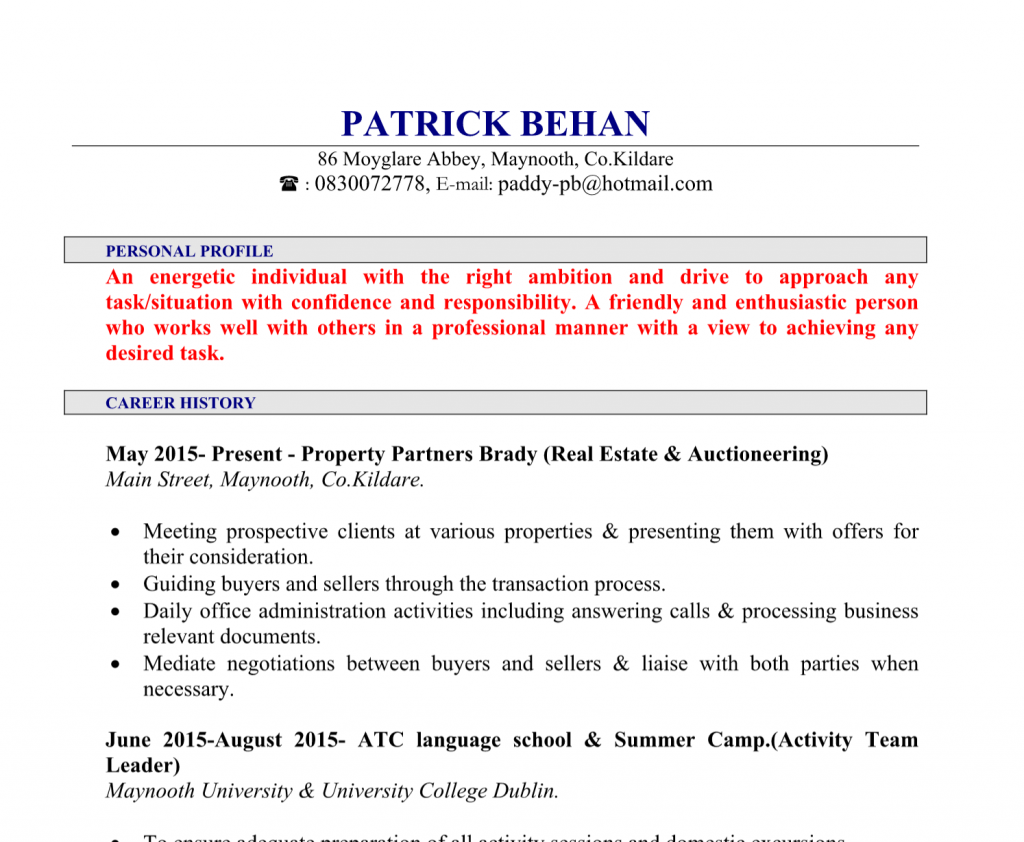 Nothing but the truth, Luther Lifestyle

I heard about Luther lifestyle for the first time about mid-August 2019, when I was noticing all our staff that had been fired for not making sales targets were still working on the beach, they were working for an unknown “company” called Luther lifestyle, frankly, I was shocked by the desperation of this “company”. Who would want sales staff, fired for not making sales? Definitely scraping the bottle of the barrel and shows how much they needed staff. Then I found out another ex-employee was behind Luther Lifestyle and it all made sense.

Luther Lifestyle Barcelona is an unknown promotion “company” in Barcelona that no one would have ever heard of that makes some rather bold claims for being such new “company” in the space, they do happen to be one of our competitors in the nightlife entertainment space so I am going to be careful how I write this open letter not to step over any boundaries as I cannot deny there is some pretty blatant conflict of interests. When it comes for me drawing an opinion. I will try to present facts as unbiased as I can and allow you, the reader to draw your conclusion.

I am writing this open letter because on Friday 28th May 2020 I received an email from the “Chief executive officer” of Luther Lifestyle, making some rather defamatory allegations, accusing me and my company of some illegal activity. I was shocked, to say the least, as everything in Barcelona is shut down due to the Corona Virus the nightlife industry is literally on the edge of destruction! I thought what an earth is this idiot talking about? I quickly wrote back a rather angry email telling them how dare they accuse me of such things without not one scrap of evidence.

The rather funny thing is, the “CEO” of Luther Lifestyle is a person I have known since 2015, he is a former employee of mine Patrick Behan, he worked for me for two summers and then went on to copy what we do, it happens all the time, someone comes to work for us thinks it is easy then goes off and tries to replicate our services, though Patrick delusional and thinks he is doing something completely original.

After being copied by Luther Lifestyle and now accused of illegal activity by them, I want to delve deep into Luther lifestyle and Patrick Behan, he has made some rather wild claims on his website and throughout his social media that I will question in this letter.

Who are Luther Lifestyle Barcelona?

Luther Lifestyle is one of the many brands to replicate I survived Barcelona, their copycat tactics are even more blatant as their head man Patrick Behan worked for us for two seasons!

Patrick Behan claims not to have copied us, he wrote to me when pulled up on it saying “We didn’t rip you off, we’re not a bar crawl, you know that.”

Let us look at the similarities between Luther Lifestyle and ourselves:-

Honestly, the similarities are beyond coincidental anyone with a brain can see they are trying to rip off our model. Patrick Behan has never had an original idea in his life.

They make some outlandish claims on their website about being this luxury lifestyle brand full of A-listers, when in fact they sell an envelope on the beach with a wristband to join their pre-party in a dive bar that is located in the warehouse district of Barcelona and offer entrance to clubs people can go to for free if they get there early enough.

Reality: This is simply not true, as Patrick Behan worked for me at that time. I think this is an attempt to give people the false belief that Luther lifestyles are something more than a startup. They started working on the beach in 2019, mid-summer.

Claim: Luther lifestyle has spent years working with some of the biggest brands, events & parties around the globe.

Reality: Well, this is not true and rather laughable, they have an email address ending in @gmail.com What global brand would work with them? Another attempt to try to add some substance to the idea they are something they aren’t.

Claim: They have exclusive & luxury connections

Reality: What luxury connections you need to put on parties for students?

Claim: They revolutionised the nightlife, events & party scene in Barcelona & beyond

Reality: As proven in this letter they copied our model there is nothing revolutionary about that, copycats have tried it before.

Reality: We have been working with all the clubs in Barcelona for over a decade and have access to everyone’s guest list numbers, Luther Lifestyle gets nowhere near the numbers they claim. 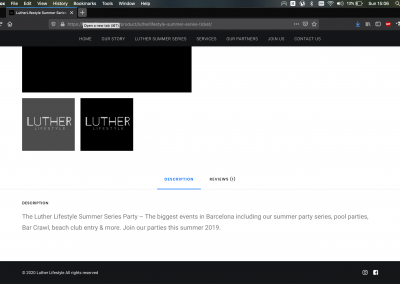 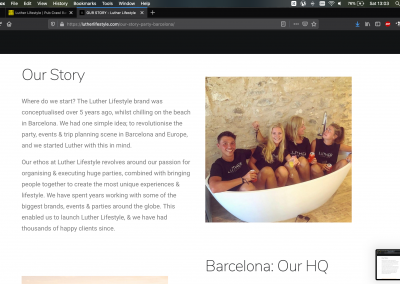 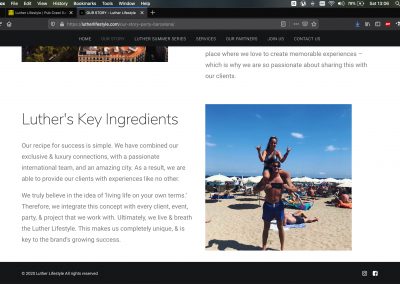 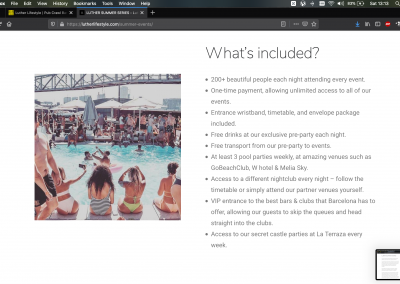 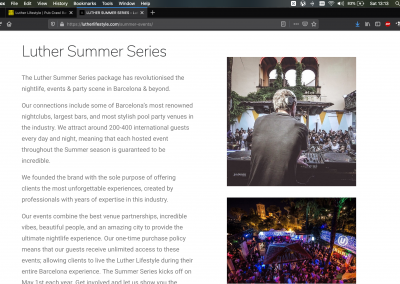 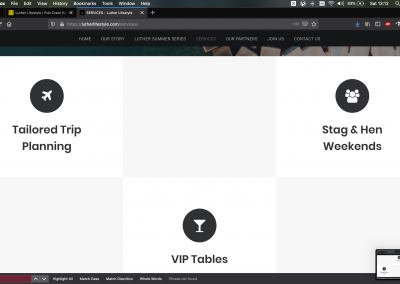 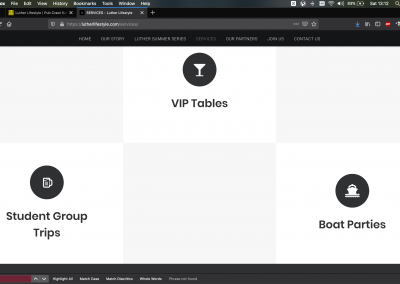 Who is Patrick Behan from Ireland?

the man behind Luther Lifestyle

Patrick Behan is on the right with the dashing red tie.

Patrick Behan claiming to be from Dublin, Ireland actually he is from Maynooth, Ireland. He a 20-something, recent university graduate from The Dublin Institute of Technology he has also claimed to have attended Universidad Del País Vasco and IT Carlow and according to his Linkedin page, he is “Chief executive officer” of Luther Lifestyles. He counts Criteo and Sherry FitzGerald as well as I Survived Barcelona as former employees.

In Patricks Behan’s minds-eye, I think he sees himself as Ireland’s answer Patrick Bateman from the film American Psycho, though lacking in any of his success he does suffer from all his associated mental problems.

Patrick Behan is more of a modern-day Walter Mitty but instead of far-flung tales of wartime heroics, his fantasies revolve around him being this super successful international businessman, running a blue-chip company, attending luxury parties surrounded by celebrities. I wouldn’t give him the credit of reading too many books as his fantasies lack the depth or intelligence of the written word, but he sure has watched far too many movies.

One thing about Patrick Behan is he takes himself and his “company” very seriously and loves a title of any importance even if unearned.

I have heard from his ex-employees, that he runs Luther Lifestyles like a fortune 500 company but instead of the glass walls of a Manhattan sky scrapper for an office, he has his three staff members sitting around in a circle on the beach drinking warm beers while he makes his best attempt at an awe-inspiring motivational speech, coming across more cringe-worthy than inspirational.

Patrick Behan likes to present himself as this impressive sales guru, who can sell ice to Eskimos, while his time working for I Survived Barcelona this just was not true in any shape or form, his sales fell far below average.

Patrick Behan did work for two summer seasons for I Survived Barcelona from 2015 this is about the only true thing on his Linkedin profile about his time working for us, but it true Patrick Behan style he has made some over the top, totally untrue claims let me dispel them for you.

Patrick Behan was never, I repeat never in any management role for I Survived Barcelona. If he showed up for work, he was often drunk, he cared about two things, drinking and trying to get with drunk girls.

Another fantasy, I remember all the top sellers as I always message them to return for another year, Patrick Behan never received such a message from myself. He was under average at selling and often did not turn up for his work shifts.

Patrick Behan claims: Ensuring events run smoothly and the necessary provisions have been implemented to achieve this.

Patrick was drunk most of the time and when he was not drunk he was hungover.

After reading his lies about his roles in my company it brings into question all the claims he has made about other employees on his page.

Just in Case Patrick Behan tries to change the Linkedin page, I have taken the liberty of supplying screenshots you can view below. 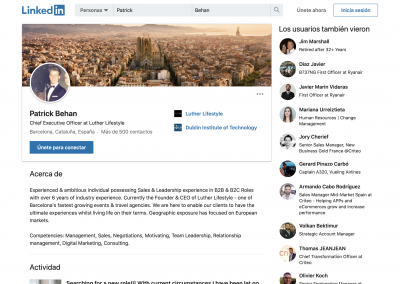 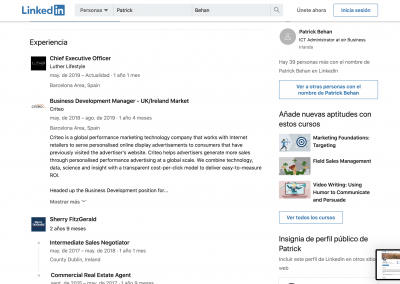 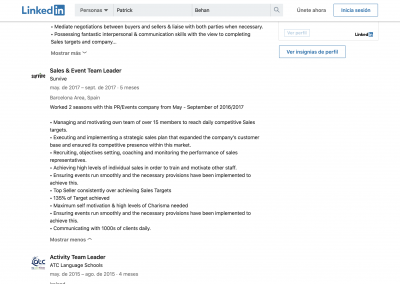 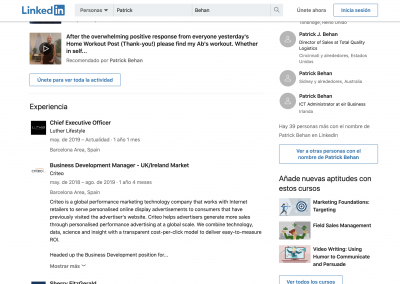 Patrick left I Survived Barcelona in debt with the company over accommodation arrears, that he promised to pay back but failed to do so. Later claiming he had no debts. When Patrick left my employment I never thought about him again until his email darkened my inbox with wild unfounded accusations of illegal activity.

I would describe Patrick Behan as a demented sociopath with underlying delusions of grandeur, a liar and a cheat. I would advise against anyone looking to take him into any type of employment. Give this guy a wide birth he has low morals and belives his own demented fantasies as reality.

The idea that Luther Lifestyle is a “company” and he is the “Chief Executive officer” of it is another one of Patrick Behan’s deluded fabrications.

Is Luther Lifestyle a real company?

You may have noticed throughout this letter I have put the words “Chief executive officer”, “CEO” and “company” in quotation marks that is because the notion that Patrick Behan runs a legitimate company is one of his fantasies.

The evidence points to the fact that Luther lifestyle is not a real company.

They have a website and a Facebook “business page” but this does not make them a reputable trustworthy company. Them being any sort of a legal entity or incorporated company is another thing dreamt up by Patrick Behan to yet again try and give some sort of legitimacy to their operation.

What kind of parties do Luther Lifestyle run?

if am honest I have never been to one but by looking at there website they are trying to portray an image of being exclusive, luxury and you will be a shoulder to shoulder with a-list clients from around the globe. This is just inside Patrick Behan’s head, in reality, it is a pre-party in a well-known rock and roll dive bar “El Coyote” then off to a club that anyone can go for free.

Do your research its all online to see and ask yourself, would you give these guys your hard-earnt money?

Patrick Behan or any “business” he is associated with is not to be trusted he has not only embellished the truth but has made outright untrue claims.

Luther Lifestyles is not a legal entity in Spain and has never been incorporated, this is not my opinion but a fact and on public record . They lack any online payment system or ways to make secure payments.

Patrick Behan has never sat on the board or been CEO of any company in Spain ever, this is a matter of public record. Luther Lifestyle is a real company in his head only. He likes to make unfounded claims and make allegations to pressure companies he has copied into some form of compliance.

Now I would challenge Patrick Behan and Luther Lifestyles to provide evidence arguing against anything I have stated, if provided I would be happy to make amendments.

Thank you for reading

I did eventually get an apology from Patrick Behan and Luther Lifestyles about the wild accusations but by then it was too late I had to expose him for what he really is, a phony.