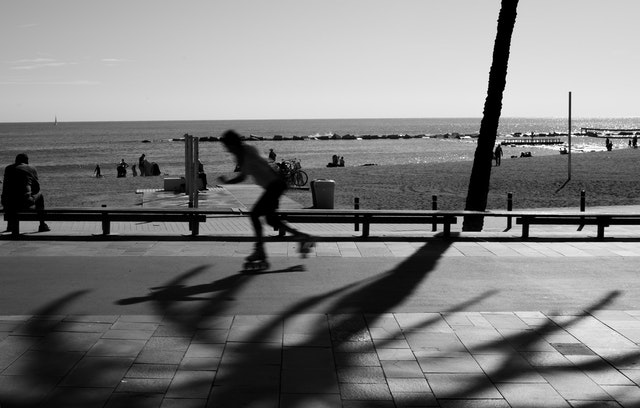 Barcelona is located north of the Spanish coast at the Mediterranean sea. It is known to be modern and somewhat ahead of its time architecturally. Barcelona is Spain’s second largest city with over 1.5 million residents. It is the capital of Catalonia, and both Spanish and Catalan are spoken here. Temperatures are normally mild with dry summers and humid winters. Over 8 million tourists visit this beautiful European city every year. Famous artist Pablo Picasso spent his early years as an artist apprentice in Barcelona. Barcelona is home to some of the most beautiful beaches in the world. The water temperature is perfect for swimming from April to October. With seven beaches around the city, there is something for everyone. Here are some of the most coveted beaches Barcelona has to offer:

This is the most popular beach in Barcelona attracting locals and tourists from around the world. While it may be the most crowded beach, it has everything you could want from food to entertainment. You can swim at this beach and participate in water sports such as kite-surfing, and windsurfing. The beach is a mile long and easily accessible by public transit. You can rent bikes for a stroll along the beach and people watch at the cafes. This beach is ideal if you are looking to stay close to the city’s main attractions.

If you are looking for a more peaceful atmosphere Nova Icaria Beach is an excellent spot for relaxation. You still have access to great bars and restaurants along the 400km of sea and sand. Nova Icaria is truly diverse and is equipped with volleyball courts paying homage to Olympic Park. It is considered one of the best beaches for kids and has a variety of water activities available.

Just North of Barcelona, Ocata Beach is a tranquil, peaceful getaway that is just 30 minutes away from the city. The spacious beach attracts fewer tourists making it the perfect place for privacy. One of the largest beaches in Barcelona, Ocata Beach hosts regular volleyball and rugby tournaments. You can find tasty chiringuitos and tapas at the beachside huts.

This beach is considered one of the safest in Barcelona. It was created in 1992 for the Olympic Games. It attracts more mature visitors which provides a quieter experience. There are still activities such as ping pong and volleyball available. It is smaller than most beaches in Barcelona but it still is beautiful and serene. There are lifeguards on duty, accessible ramps, and showers.

Nova Mar Bella is another beach that was created for the Olympic Games in 1992. Known for its peacefulness highly due to its lack of restaurants and bars. Nova Mar Bella is twice as big as Nova Icaria with plenty of areas to rollerblade, sunbathe, play sports, kayak, or windsurf. If you prefer to take a luxurious ride on a yacht, rentals are available at Nova Mar Bella. It is also one of the only two nude beaches in Barcelona.

One of the longest beaches in Barcelona, Sant Sebastia attracts both regulars and tourists year round. It is similar to La Barceloneta in that it has a lively atmosphere, especially in the summer. Visitors can take part in volleyball, water, and extreme sports. There is a nudist area similar to Nova Mar Bella. With the wide variety of dining options, it is easy to spend the whole day at Sant Sebastia.

Located outside of the city, Castelldefels sits on a stretch of coastline 18 miles from Barcelona City. The town is chocked full of fabulous restaurants, bars, and shops. You can head over to the marina to participate in windsurfing, jet skiing, kayaking, or kite-surfing. Castelldefels is an inexpensive area of Barcelona that provides a relaxing atmosphere with room for everyone. During the low season, the beach is practically empty.

Established in 2006, Llevant Beach is the newest beach in Barcelona. it is located close to Nova Mar Bella Beach but further from the city. You will find Llevant Beach less crowded than the others. There are lifeguards on duty, adapted showers and public toilets, beach umbrellas, Wi-Fi, and bicycle parking.

Somorrostro Beach is located in between Marina Street and Hospital del Mar. It is very close to the city and is one of the most popular beaches in Barcelona today. Locals, tourists, and the younger generations flock to this beach every year. There is a sports center located at the beach where you can enjoy seawater swimming pools, showers, lockers, changing rooms, and sun loungers.